The Legend of Christmas Elk

The appearance of deer is a symbol of auspiciousness. On a cold winter day, the beautiful red nose flashes in the snow, making people feel warm when they look at it.

According to legend, its partners didn’t like its red nose, and always laughed at its nose, and didn’t play with Rudolph. Rudolph was very sad, hiding himself in a corner, and the light of his red nose dimmed.

In a certain Santa Claus came to the herd. He is looking for a reindeer to help him pull the sled. The reindeer are vying to show themselves, hoping to be chosen by Santa Claus. Only Rudolph, hiding in the corner alone, did not dare to come out to see Santa Claus.

But its red nose gave out a dazzling light. Santa Claus found Rudolph with a shiny nose among the deer, and he liked it very much, so he let him pull the sleigh for himself. 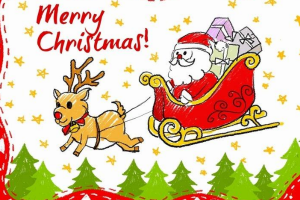