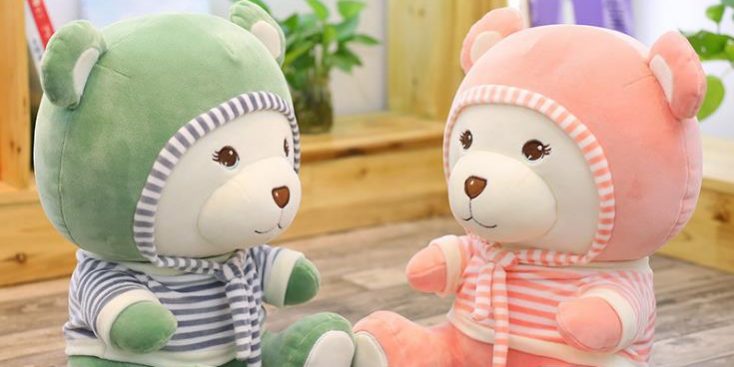 6.Disney
Founded in 1922, Disney has evolved over the years to become a multinational group with operations in film, theme parks, real estate, and other entertainment businesses. At present, Disney has evolved into a technology system that includes not only hardware, facilities, machines, and processes, but also transportation, communication and information networks that link it all together, as well as a large number of employees and a range of rules and regulations that operate efficiently.
7.RUSS
The US RUSS branded toy was founded by Russell Berrie in 1963. It started with a small-scale gift store with its own home as an office and a garage as a warehouse. RUSS’s products are ever-changing. In addition to plush dolls, RUSS’s exquisite ingenuity has also given lions a new life for all kinds of daily necessities. RUSS has thus developed into the most successful composite gift store in the United States.
8.MAJORETTE
It is a famous stuffed toy manufacturer and seller established in France in 1924. It is also the leading international group company in the European and global toy industry. It has been more than 80 years old. Professionally dedicated to the development, production, and sales of children’s toys from birth to 10 years old, SMBOY has two major toy brands, SMBOY, and MAJORETTE. There are more than 30 series, the number of single products exceeds 4,000, and the number of new products increases by more than 500 each year, according to gender and age. Classification, functions, indoor and outdoor, copyright, scenes, etc., follow the concept of accompanying children to grow and improve their intellectual development, safety, and environmental protection so that children not only enjoy the fun of the game but also learn to give and share in the process of playing toys. All the toys produced are designed by French designers.
9.NICI
One of the world’s top ten plush toy brands, soft to the touch, unique appearance, fabrics is high-grade coral velvet, built-in high-grade imported PP cotton. Germany’s NICI plush toy was born in 1986 in Altenkunstadt, Germany. In addition to NICI, the brand also has NICI SPORT and NICI HOME. Since its inception, NICI’s products have been distributed in more than 50 countries and regions around the world, and are increasingly becoming the leader in gift brands. The most well-known creation of NICI from Germany is simply a series of simple and sincere animals. Because the boss and designer are not from the traditional design class, and we are less familiar with the stereotype of beautiful design, with the love and observation of animals, each design of NICI is free and happy, and the completion is not complicated. The animal design combines the body of each animal with a simple few block elements to form a cute look. With a sincere and simple idea and a courageous creation, NICI can enjoy the legend of running in the brain like a child, and rely on both hands to complete each naive idea with a story, enough for every adult in the world. They are all infected with simple happiness, and once they are in their arms, they can’t put it down. Moreover, its plush toys can be machine washed, not deformed after washing, and the hair feel is still the same, even better. So, when your baby toy is dirty, you should stop worrying about losing its past style after washing.
10.Smoby
Founded in 1924, Smoby is a company of nearly 100 years old. It is an international group company dedicated to the design, development, production, and sales of toys from 0-12 years old. There are more than a dozen series of our toys, which are classified according to age, gender, function, indoor and outdoor, copyright, scene, etc., with nearly 4,000 items. Each piece and every part follows the growth of accompanying children and enhances them. The concept of intellectual development, safety, and environmental protection.